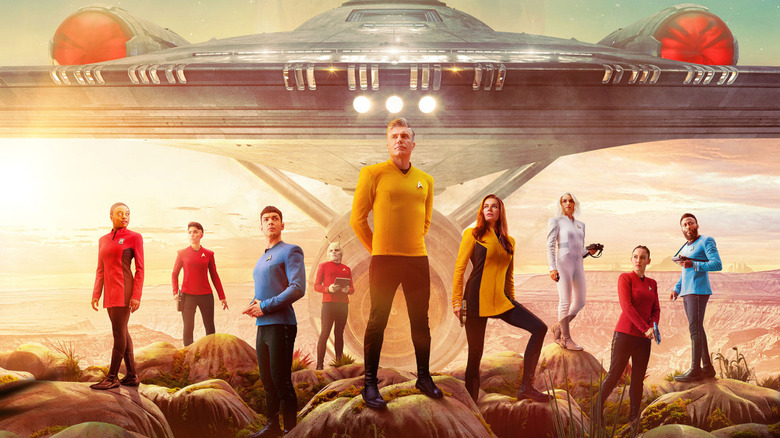 “Star Trek: Strange New Worlds” is the twelfth TV series in the 55-year-old franchise, and the sixth to be released on Paramount+ (if you count “Short Treks” as its own series). Modern “Star Trek” is currently adhering to the modern entertainment ethos of putting all your eggs in one basket. More and more companies are relying on recognizable IP in order to sell their projects, and Paramount leaned into “Star Trek” hard, producing 115 episodes of TV since September of 2017. To the eyes of old-world Trekkies (also known as sticks in the mud), there appeared to be a mandate applied to modern Trek: Make it as different from established canon as possible.

“Discovery” is a bleak, weepy, violent series that eschewed “Trek”‘s classical one-hour-morality-play structure in favor of season-long story arcs (as is the typical model of all modern TV). Few of the new “Trek” shows were about Roddenberry’s vision of optimism, intelligence, and diplomacy, preferring tales of conflict, war, torture, brainwashing, and genocide. With the proud exception of “Star Trek: Lower Decks” — which acknowledged the basic premise of being a workplace drama — new Trek shows have felt … off. Like the creators don’t really know what they’re doing with a technically-inclined show like “Star Trek,” nor how to write a story that doesn’t lean into violence and pessimism.

The runners of post-’17 “Star Trek,” in wanting to create a “This ain’t your dad’s Trek” version of the show, skewed into convoluted storytelling, clumsy fan service, and ideas that were anathema to the franchise’s heyday in the 1990s. This may have been a result of Too Many Cooks getting involved; each episode of “Discovery” and “Picard” each have over 20 credited producers.

One of the aforementioned bouts of clumsy fan service was the appearance of Capt. Christopher Pike (Anson Mount), the captain of the Enterprise prior to Kirk, previously played by Jeffrey Hunter in the unused “Trek” pilot, by Sean Kenney in “The Menagerie,” and by Bruce Greenwood in the 2009 “Star Trek” feature film. Pike would play a major role in the second season of “Star Trek: Discovery,” taking control of the title ship to search for Spock (Ethan Peck). Mount was so appealing in the role, Trekkies on social media began demanding that he get his own series wherein “Star Trek” could move back aboard the Enterprise, and fans could surround themselves with familiar characters and iconography again.

So that’s what Paramount did. And, in returning to a familiar ship, familiar characters (Pike, Spock, Number One, Khan, Uhura, Dr. M’Benga, Nurse Chapel), and Trek’s classical and well-worn hour-long episodic format, the franchise has finally reached a point where it is … however unbelievable it might be … legitimately good once again. No qualifications are needed any longer. “Strange New Worlds” is, quite simply, the best “Star Trek” show in decades.

(The rest of this review will take a brief look at each episode given to critics in advance. Although major plot details are not revealed, I’ll address the basic premise of each episode. If you want to remain 100% spoiler-free, you can stop here — just know that the show is good.) 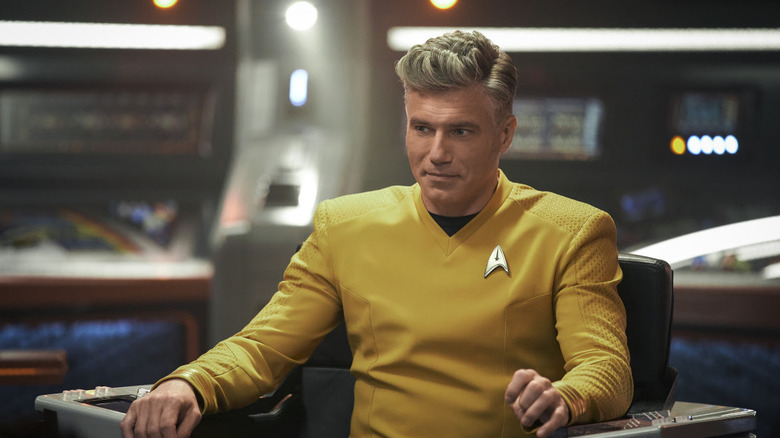 It’s worth remembering that no “Star Trek” series started at its peak. The first two seasons of “Next Generation” and “Deep Space Nine” experienced growing pains, and multiple episodes featured dodgy writing or strange character choices. “Voyager” didn’t pick up in the ratings until the introduction of Seven of Nine (Jeri Ryan) in the fourth season, and some would say “Enterprise” didn’t really start kicking until season three. That “Strange New Worlds” is starting as strong as it has is most certainly a promising sign of things to come.

A good TV pilot doesn’t necessarily need to have a very interesting story. On a basic level, a pilot needs to establish the setting, who the characters are, how they relate to one another, and the basic premise of the show. “Strange New Worlds” does this remarkably well. The camera dwells in smaller locations for longer amounts of time (when compared to the swirling, location roulette of “Discovery”) allowing viewers to understand the geography of the Enterprise well. It now feels like a place where employees might be working. Characters are also allowed to have incidental conversations not pertinent to the plot, giving viewers a better sense of who they are. When we meet characters who are constantly in crisis mode, we don’t get to know them too well. “Strange New Worlds” has made great allowances for non-action. For those exhausted by modern “Star Trek” presented at a fever pitch of incident, “Strange New Worlds” feels like Ozu in comparison.

Episode 2: Children Of The Comet 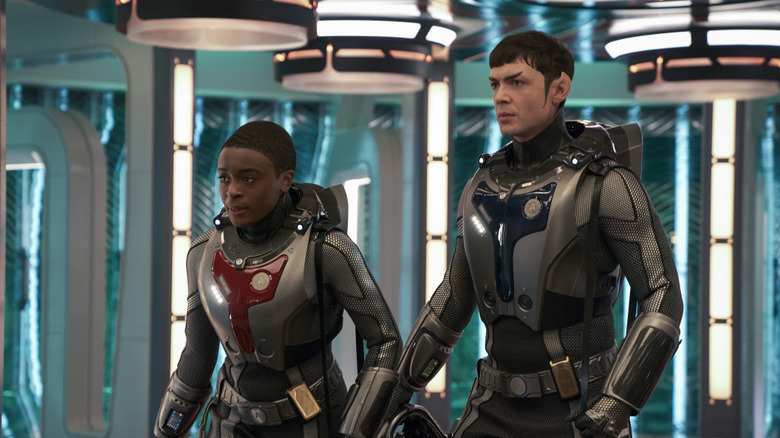 In “Children of the Comet,” the Enterprise discovers a rogue comet that is on course to hit an inhabited planet, potentially killing millions of people. The comet possesses an ancient interior machine of some kind, preventing easy rerouting of it. This is a character episode for the teenage Uhura who, still only a cadet, must walk across a comet surface and face how exhilarating and how difficult it will be to be a Starfleet officer. Meanwhile, Pike has to negotiate with a newly-appeared tribe of religious zealots who worship the comet and protect it as it flies through the heavens. They assure Pike that the comet is intelligent and that its will is not to be interfered with.

Without giving too much away, “Children of the Comet” ultimately lionizes diplomacy, and Spock is granted a moment of heroism.

In including so many legacy characters from the jump, “Strange New Worlds” seems to be under no pressure toward dramatic reveals of known “Trek” iconography. The inclusion of familiar names seems to be enough for the show-runners, allowing them to eschew the usual “legacy sequel” story beats that have become annoying common in the Age of Regurgitation; There are no loving closeups of Starfleet badges or communicators. There are exteriors of the Enterprise, but they do not descend into vehicle fetish. Although “Strange New Worlds” is a direct expansion of known Trek lore, the showrunners seem to have finally dropped the foolish twin pop philosophies of “We’re doing this for the fans” and “We’re reinventing everything.” They found an old recipe, and it still tastes good.

Do it for people who aren’t fans. That’s how you make new fans. 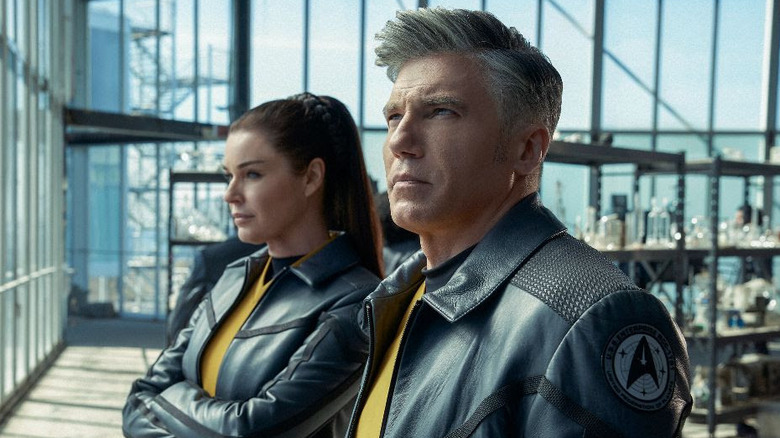 “Ghosts of Illyria” is a virus episode, a common subgenre across all “Star Trek” shows. In “Ghosts,” a strange, incurable affliction has taken control of the crew, giving them a strange preoccupation with staring at bright lights. Dr. M’Benga learns that a recent visit to a planet (that once was home to a race of genetically engineered beings) is the source of the infection, but he cannot find a cure. Only first officer Una Chin-Riley seems to be immune and has to be the one to ultimately find a cure. In the episode’s B-plot (remember those?), Spock and Pike, still trapped on the planet’s surface, must decipher an ancient glowing scroll to find what happened to the inhabitants.

Una is the focus of “Ghosts of Illyria,” and we learn a lot about her character (including a few interesting secrets). In “The Cage,” the original “Star Trek” pilot, Una — then known only as Number One — was played by Majel Barrett, and Number One was resolute and authoritative but given little in the way of backstory or character. “Strange New Worlds” has been, so far, graceful in introducing new information about established characters without contradicting canon nor making their backstories so absurd that a Trekkie would roll their eyes (This may be a mild spoiler, but Una is not, for instance, Q in disguise). The same can be said of Dr. M’Benga, who has a secret of his own. His character is deepened by the reveal, not cheapened.

Notable: Majel Barrett played three major roles in the original “Star Trek”: Number One, Nurse Chapel, and the computer voice. She was so good, three actresses are required to fill her shoes. 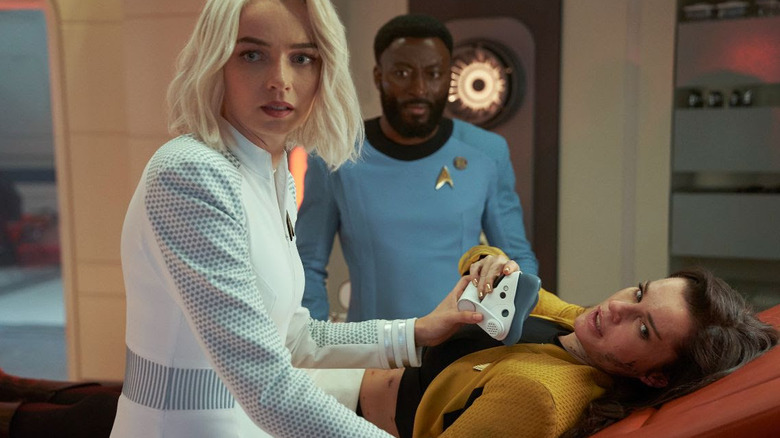 “Memento Mori” is an action episode, and focuses on Lt. La’an Noonien-Singh. In the continuity of “Star Trek,” Khan Noonien-Singh was a cryogenically frozen relic of the Eugenics Wars, a worldwide conflict between people who had been genetically enhanced and those who hadn’t. Since then, genetic engineering had been strictly banned in the Federation, and the people who had been altered typically had to keep it secret. La’an, then has to struggle with being an outsider while also being, technically, superior to those around her.

In “Memento Mori,” the Enterprise is attacked by a Gorn ship. Trekkies may remember the Gorn from the classic episode “Arena.” La’an once (barely) survived a battle with the Gorn, and instructs Pike that usual Starfleet tactics will not work. As the ship gets battered, characters are paired off in crisis areas and have to work together to solve smaller individual problems. Uhura and Hemmer, for instance, have to repair a vital engine part after Hemmer’s hands are injured. This is evocative of the story of the Next Gen episode “Disaster,” or the “Deep Space Nine” episode “Civil Defense.” There is a great relief and exhilaration to be had watching intelligent people solve problems intelligently. 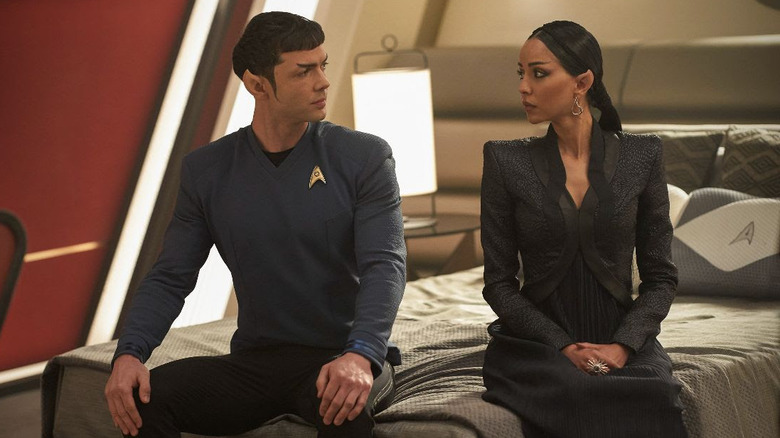 “Spock Amok” is the release of the pressure valve. This is a “hang-out” episode wherein there are four plots, a lot of slapstick, and a few character moments. While docked as a star station, Pike is tasked with negotiating a notoriously difficult species into joining the Federation. Spock, meanwhile, is reunited with his betrothed wife T’Pring (Gia Sandhu) who seems annoyed that he chose to work on the Enterprise instead of staying back on Vulcan and having hot sex all day; it appears Vulcans can mate outside of pon farr. T’Pring was featured in the classic episode “Amok Time,” better known as the one where Spock goes into heat.

Meanwhile, Nurse Chapel reveals that she has an on-again-off-again boyfriend to whom she fears committing. In discussing her love life, Lt. Ortegas mentions an ex-girlfriend, explicitly making Nurse Chapel bisexual. This comes after Eng. Beckett Mariner on “Lower Decks” also talked about ex-girlfriends and boyfriends. Like something dying of thirst in a bisexual desert, this author appreciates the sudden slaking of bisexual thirst. Nurse Chapel was originally played by Majel Barrett, and she famously had fallen in love with Spock. The foreshadowing of their relationship is mildly tiresome but written organically.

Additionally: Because they are both serious people, and because they are both genetically engineered, Sa’an and Una have begun to bond as friends. When the two of them discoiver that the Enterprise’s ensigns are involved in an ongoing secret game of what they call Enterprise Bingo, the two senior officers attempt to play themselves. A relief that “Star Trek” characters are allowed to be silly.

To reiterate: If a “Star Trek” show is going to begin this strongly establishing its setting and characters with the passion and attention to detail of a ’90s Trek show, then we will only have better and better things to look forward to.

Read this next: 20 Underrated Rom Coms You Need To Watch